Coffee: An Amazing Plant That Has Shaped Modern Society

The coffee plant contains an alkaloid called caffeine. Of all the natural compounds out there, caffeine is one of the most well-known and widely used natural compounds. Caffeine has a place in many cultures across the globe, in the form of coffee, tea, chocolate, yerba mate, kola nut, guarana and a variety of other herbs and drinks. It can be argued that caffeine played an important role in shaping modern society, both in an economic sense and in an innovative sense. Herbs and drinks that contain caffeine are a highly praised commodity. Herbs and caffeinated drinks are also highly praised for enhancing productivity by both the workforce and within the educational system. Imagine how much harder it would be to get through those boring 2 hour long college lectures or a Monday at work after a long weekend without having a readily available source of caffeine within arm’s reach? So, it is no surprise that coffee is currently one of the most widely consumed beverages around the world with the demand for coffee only growing. So where did it all come from? How did we figure out how to use coffee (and caffeine) to benefit our productivity, and furthermore, how has it been a spark for innovation across the world?


The History of Coffee and Caffeine

The story of coffee follows two different paths. The first being the story of a goatherd noticing how vital his herd of goats were after eating red berries from a shrub. This is the most widely known story, yet the legitimacy of it seems questionable. The second story, is of a healer from Mocha, Yemen who was exiled to a cave in the desert. This man was left there to starve, but found a shrub full of berries. The berries were bitter, so he tried to roast them. This made the berries so hard, that he was not able to eat them. He then decided to boil the roasted berries, in an attempt to soften them up. The result was a dark brown fragrant liquid that instantly revitalized him and gave him boundless energy.

Word quickly spread to Mocha about these miracle berries and the man was asked to return to Mocha. Rumor of the magical effects of these berries did not disappoint, and the exiled man was promptly made a saint. The berries were then used religiously in Yemen until the berries spread to Europe. There was a widespread race to obtain live coffee bushes and bring them back to Europe, however, this proved to be quite the challenge as the live coffee bushes were closely guarded in Yemen. However, in 1616 a Dutch merchant was able to obtain a few of these coffee bushes and brought them back to Amsterdam. Conveniently, Amsterdam had a big greenhouse already built (hortus botanicus) in which the coffee bushes thrived. Much later, in 1658, these bushes were transported to Ceylon (Sri Lanka) and southern India where the coffee bushes also thrived, but of course, on a much larger scale than in the greenhouse. Later, coffee production was moved over to Java (Indonesia) and this is where coffee really started to become big business. Unsurprisingly, you have probably seen coffee being referred to as Java, and the origins of this date back to the first commercial coffee farms. Some time later, the Dutch gave a coffee plant to the king of France, which eventually made its way over to the Americas. Currently, Brazil is one of the largest coffee producers in the world.

From there on out, the berries were prepared in various different ways and consumed on a massive scale. In fact, one of the most popular beverages around the world is currently coffee. This is no surprise as the warm, fragrant, bitter, and slightly sweet liquid can warm us up, improve our mood, beat boredom, inspire us, and above all, make us more productive. However, after hundreds of years of coffee consumption, the effects of that special alkaloid, caffeine, have not been improved upon much. Until now.

As delicious as coffee is, it is not always practical in modern times. It takes time to prepare, it isn’t very portable and if you buy it at a café, it can become an expensive hobby. This does not mesh well with busy lifestyles or working professionals and many of us need a solution to this problem. One of these solutions has always been tablets, capsules or pills with caffeine in them and more recently we have seen gum with caffeine in it, liquid shots with caffeine in it, and even delicious chocolate bars or peanut butter loaded with high doses of caffeine. However, all of these coffee alternatives lack something. This is because coffee doesn’t just contain caffeine, it contains a plethora of other compounds that alter the effects of caffeine.


What Are Beta-Carbolines In Coffee And How Do They Work?

These beta-carbolines are inhibitors of two enzymes called monoamine oxidase A (MAO-A) and monoamine oxidase B (MAO-B). These enzymes play an important role in how caffeine works. Caffeine blocks a collection of receptors called the adenosine receptors. These receptors are very unique because they are linked to other neurons, such as dopaminergic neurons, through a link called a heterodimer. By blocking the adenosine receptors, the neurons they are linked to can become more active. This is in part how caffeine produces its productivity enhancing effects. The monoamines (dopamine, serotonin and norepinephrine) are broken down by both MAO-A and MAO-B. Since the beta-carbolines inhibit these enzymes, the monoamines that get released by caffeine blockade of the adenosine receptors ends up having more of an impact. This appears to greatly add to the effects of both caffeine and nicotine since tobacco also contains similar beta-carbolines as those found in coffee.

With the above in mind, this is where a large part of the challenge came from in designing the unique formulation for DynaMAX Enhanced Caffeine. We wanted to produce similar effects as those felt after coffee consumption but we also did not want to add beta-carbolines to the mix since they can come with a slew of side effects and the dosage would be hard to get right. So, let's take a look at the complete blend of ingredients found in DynaMAX Enhanced Caffeine starting with a fascinating compound called methylliberine which we paired with instant caffeine in Stage 1 of DynaMAX's sustained energy. 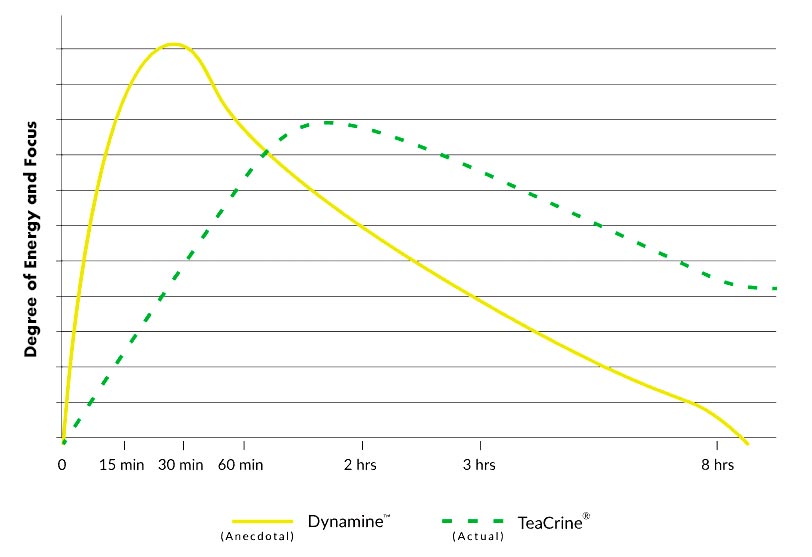 Methylliberine is thought to be a negative allosteric modulator of the adenosine receptors. What this means is that instead of directly blocking the adenosine receptors, like caffeine does, it can make the receptors less sensitive. This in turn means caffeine should have a greater impact. It is also thought that Methylliberine directly acts on dopaminergic receptor, which should lead to a noticeable focus and energy boost. Taken together, this should lead to a smooth and non-jittery boost to caffeine, much like beta-carbolines, only slightly more targeted. 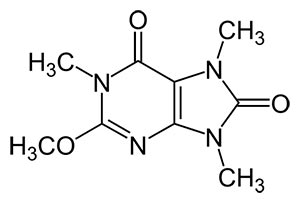 In practice, this also definitely seems to be the case. Just on its own, in our initial beta-testing, Dynamine Methylliberine produced a quick mood boost after a very short period of time. However, it lacked a bit of stimulation and punch that you would expect from coffee consumption. Adding a small amount of instant caffeine to the mix produced the quick effects, stimulation and punch we were after. That was "stage one complete" in perfecting DynaMAX's formulation, but because of the rapid onset there was a slight amount of edginess. The effects also came on quick, but went away fairly quickly. With Stage 2, we set out to fix both of these issues by stacking caffeine with l-theanine.

Stage 2 of DynaMAX: Stacking Caffeine with L-Theanine To Lock In Focus and Energy

The second stage of Dynamax Enhanced Caffeine occurs shortly after the quick stimulation sets in. This is when L-Theanine is released, which is a calming amino acid found in green tea. L-Theanine does a good job of smoothing the "rough edges" of caffeine consumption, while locking in and focusing the stimulation. There have been a lot of studies on the combination of L-Theanine and caffeine and it has been found to be a very promising combination for inducing a controlled sense of energy and focus. So, it is no surprise that this combination is already widely available to buy from many dietary supplement and nootropic websites. However, the ratio of caffeine to L-Theanine is often times one part caffeine to two parts L-Theanine. In our experience, this is great for individuals who are sensitive to caffeine, but can almost be too calming for individuals who are not very sensitive to the effects of caffeine. Through beta-testing the isolated combination of caffeine and L-Theanine, we found that a 1:1 ration of caffeine to L-Theanine produced the best sense of calm stimulation for us. This 1:1 ratio of caffeine to L-Theanine is what we ended up finalizing in the formulation of DynaMAX Enhanced Caffeine. This gives DynaMAX a little extra oomph without the jitters that are typically associated with caffeine consumption.

The third stage was designed to keep the focus going for a more prolonged period of time. We used a unique formulation of caffeine designed by ZumXR which releases a bolus of caffeine 2 hours after its initial consumption. The combination of caffeine and methylliberine lasts around 3 hours and we noticed a dip in its ability to promote energy and focus at around the two-hour mark. This is exactly at the point where our delayed release caffeine is released which counteracts this dip. During beta-testing the final formula of DynaMAX, we noticed that we would get locked into focusing on whatever we were doing right away and would start to lose a bit of mental stamina at around the 2 hour mark. It was after this point which a distinct but subtle bump in focus could be noticed from the delayed release caffeine.

The fourth stage plays more of a supporting role and can’t really be considered a stage at all since it plays a role during the entire DynaMAX experience. We decided to add a small amount of extended release caffeine to DynaMAX which boosts the overall effects of all of the ingredients contained in DynaMAX. More importantly however, the extended release caffeine, which is also made by ZumXR, last a whopping 8 hours! This means that there won’t be a significant caffeine crash and you will simply notice the DynaMAX experience coming to a gradual halt over time.

To learn more about the timeline of action for DynaMAX Enhanced Caffeine, see the image below.

DynaMAX Enhanced Caffeine As Your Natural Energy Supplement Of Choice

Overall, we feel that DynaMAX Enhanced Caffeine perfectly captures the effects and benefits of a cup of coffee, while also improving upon those beneficial effects so that they last up to a full 8 hours. To us, this is the future of convenient caffeine supplementation; and at least at Natrium Health, the next step in utilizing caffeine for its plethora of benefits. DynaMAX Enhanced Caffeine has replaced that afternoon coffee for a lot of us, and we’ll let you in on a little secret: this blog was written and edited by our product specialist with the help of DynaMAX! #PoweredbyDynaMAX 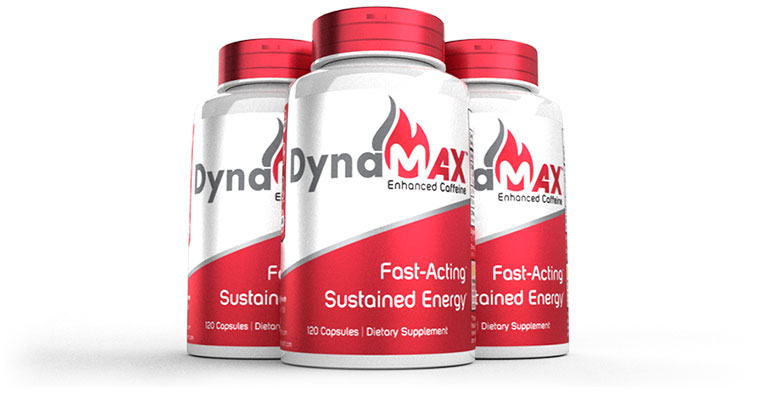 
Attention:*These statements have not been evaluated by the Food and Drug Administration. This product is not intended to diagnose, treat, cure or prevent a disease.